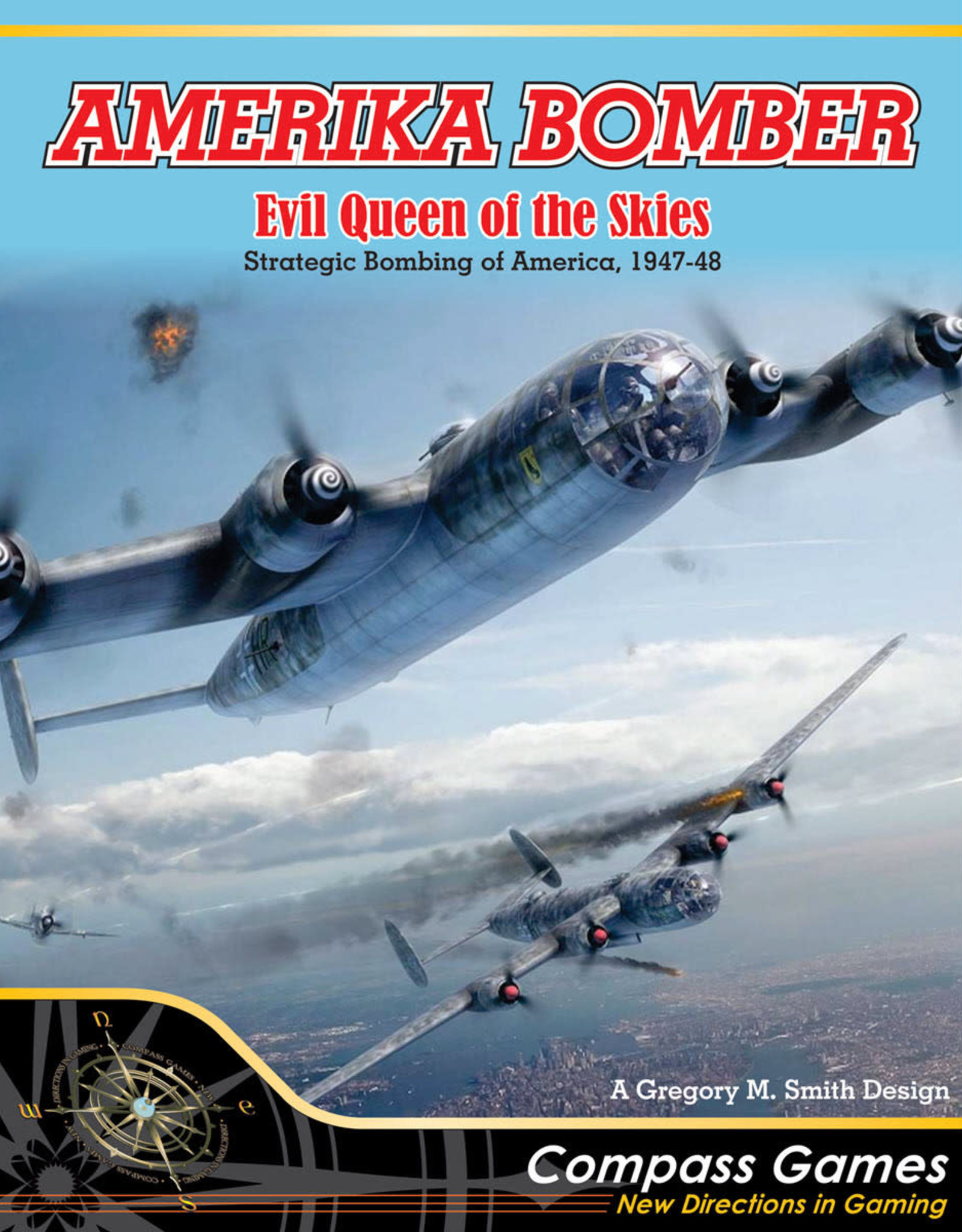 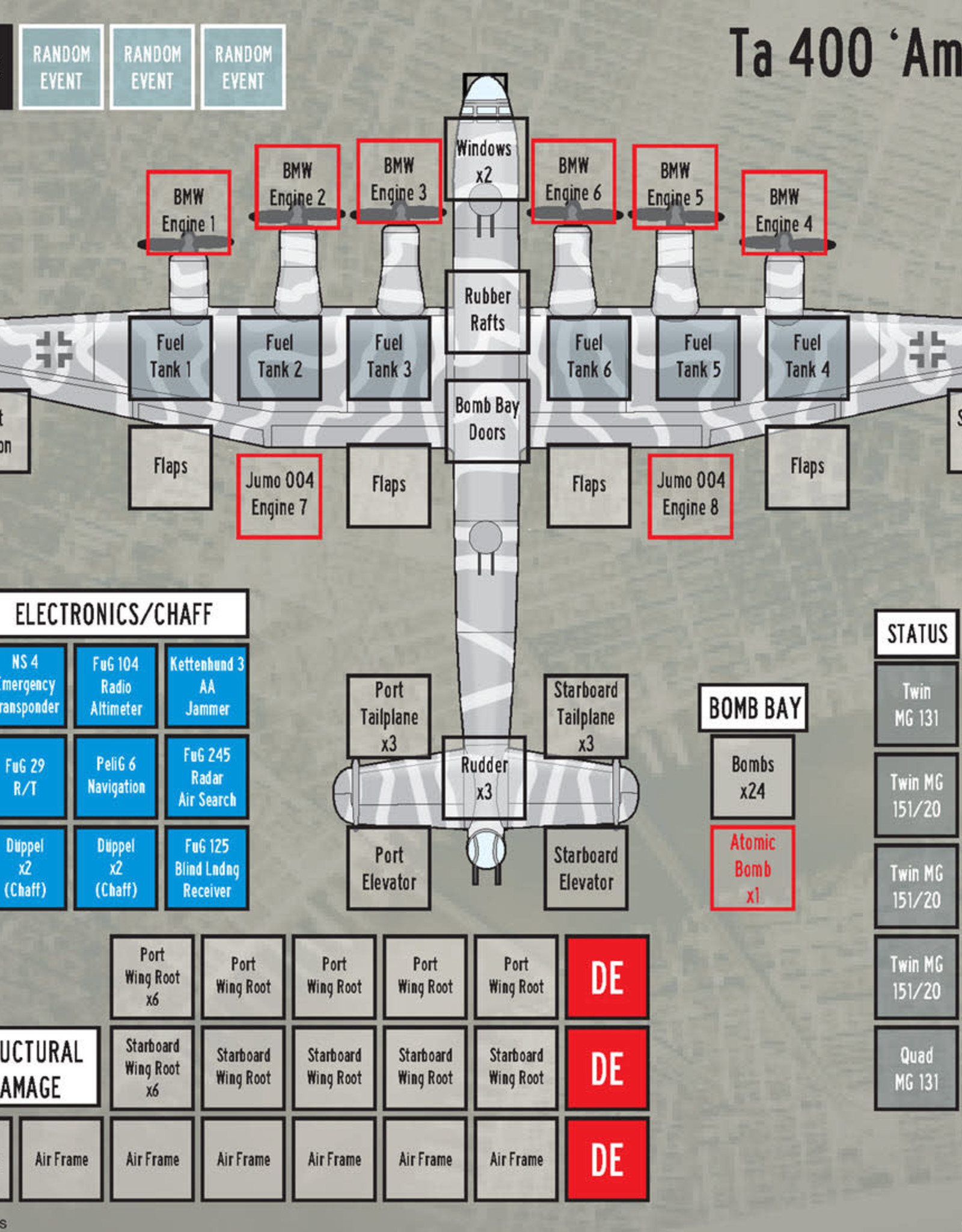 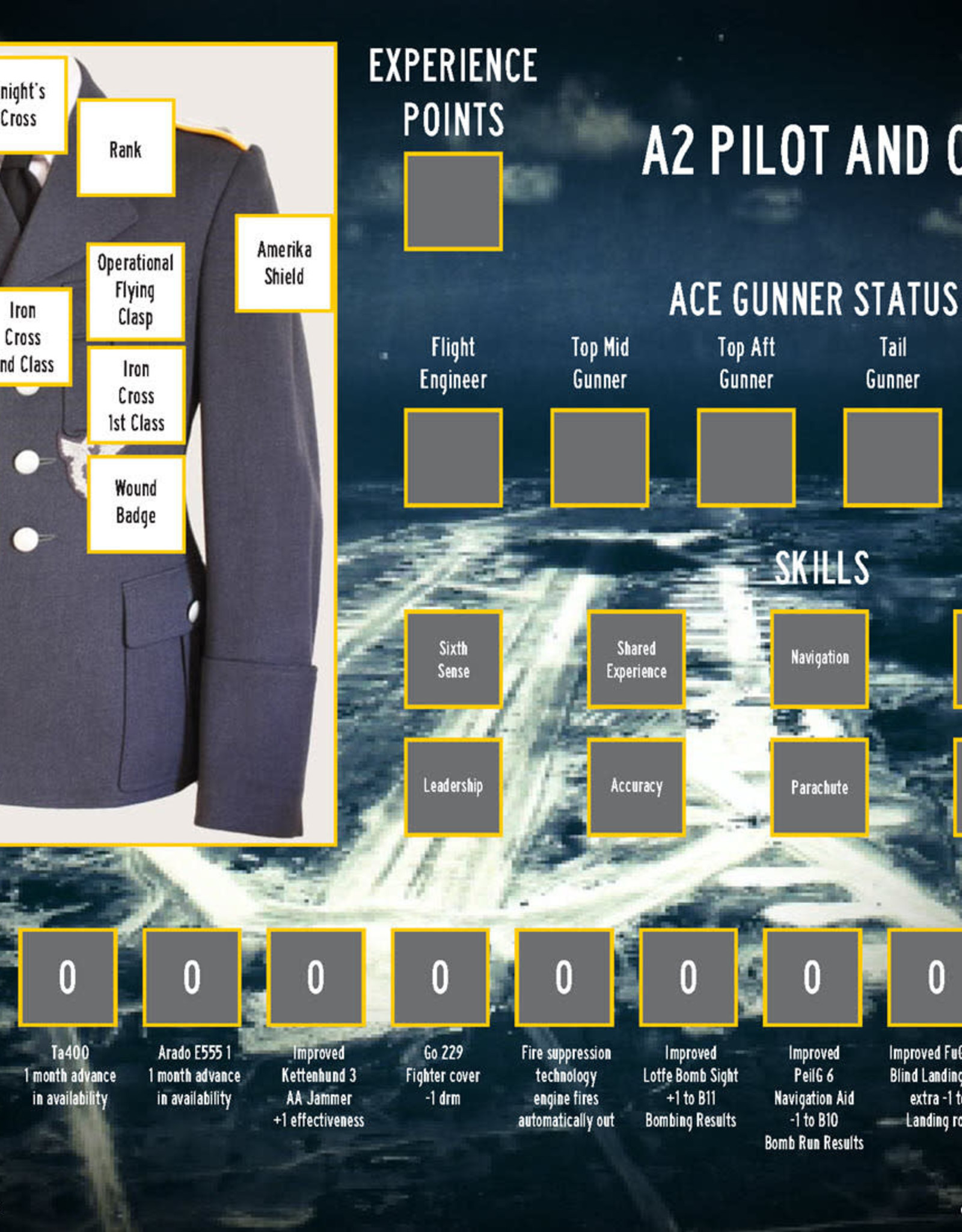 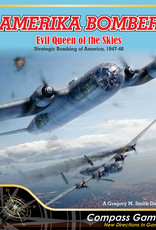 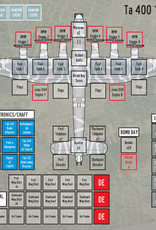 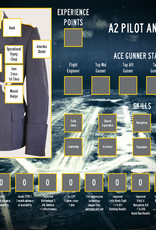 In another timeline, England stands alone in Europe: beaten down but not completely destroyed. The Soviet collapse in 1944 combined with an armistice allows the Germans to rest and refit their armies and deploy back to the west. The Americans have finally decided to declare war on Germany, but it seems to be a somewhat futile gesture, as any attempt to liberate Europe would have to face the full might of the Wehrmacht and Luftwaffe.

In 1946, the Amerika Bomber becomes a reality. The German Atomic bomb project is almost complete.

In 1947, the first missions begin against the American Homeland…

Amerika Bomber:  Evil Queen of the Skies is a solitaire, tactical level game which places you in command of a hypothetical, yet historically-based bomber aircraft during a frightening look at what might have been in World War II. Each turn consists of one sortie, during which the player will fly a mission to bomb the mainland of the United States.  As the player progresses, he may choose to upgrade to even more advanced bombers in this alternate history game. Amerika Bomber is based on the popular, action-packed “B17: Queen of the Skies” system and pays homage to Glen Frank’s original system, but with streamlined routines and a few twists. It builds a strong narrative around the pilot as you look to earn skills, rise in rank through promotion, receive awards and survive a dangerous year above America.

The objective of the game is to conduct numerous sorties in the role of a bomber pilot and rack up a high bombing percentage total. Pilots may use the experience gained to improve their odds of success by purchasing skills. Awards and technological advances via use of the technology track help to narrate the player's eventual goal – to become the “Scourge of Amerika” and end the war in Germany’s favor.

The system is packed with rich technical detail based on proposed aircraft designs, but without the complexity to capture the key facets of a hypothetical strategic bombing campaign over America. There are 5 bomber aircraft models available to pilot. The bombers are:

For each bomber, you will be using the date of availability, speed, area of operations based on originating base, individual weapon systems, damage, and crew status.

Players are assigned to the hypothetical air base in the Azores, and conduct bombing missions from there while Type XXI U-boats stand by to provide “lifeguard” duty if required.

Besides the focus on hardware, the human aspect of the war is captured as the Pilot and Crew can improve over time via the acquisition of skill and “Ace Gunner” status. In addition to having streamlined combat routines to facilitate ease of play, the game includes a major change by the inclusion of the “Technology Track.” This system allows the player to decide which technological advances he wishes the scientists to pursue in order to improve his combat effectiveness. Some are based on survival, some on increased bombing accuracy – it is a major decision the player must make each month.

Game play moves quickly, following a set sequence of events that are repeated until the end of the game. Once you have your initial pilot and crew along with your assignment, play proceeds by checking for enemy aircraft along your path as you travel to your assigned mission – to bomb a multitude of targets on the mainland United States.  Combat consists of interception from U.S. carrier and land-based aircraft, depending on where the player is currently located, and the U.S. antiaircraft guns will also pose a major threat upon approach to the target. After bombing and returning to base, landing operations occur, with the weather playing a factor again as part of the landing procedure. When the mission is completed, you will ascertain if any awards have been earned or Experience points gained prior to you next sortie. Here you can also spend Experience points if desired to gain skills and may request a new bomber type if one is available. You will repeat this process by going to your next sortie until shot down and killed, or until the end of March 1948, should you make it through unscathed.

This game is highly accessible to those familiar with the B17: Queen of the Skies system. The game system lends itself very well to capturing the tense feelings of being on a bombing mission, and gives a frightening look on “what might have been” had the Allies fared poorly in the war. While Amerika Bomber: Evil Queen of the Skies is designed as a solitaire gaming experience, additional options for play are provided for both multi-player cooperative and competitive gaming sessions.

Amerika Bomber: Evil Queen of the Skies is meant to be a highly playable and interesting solitaire game covering a strategic bombing campaign that never occurred. But it is also a sobering look at what might have happened if World War II had gone differently. 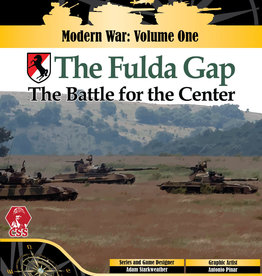 Stopping the possibility of a Soviet advance against NATO required some of the highest skilled troops to defend far forward in West Germany to prevent the vital industry and population from falling into Soviet hands
Add to cart
Fulda Gap
$149.00 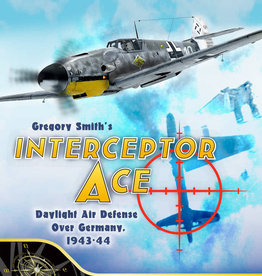 Interceptor Ace: Daylight Air Defense Over Germany, 1943-44 is a solitaire, tactical level game which places you in command of a German fighter during World War II.
Interceptor Ace
$99.00 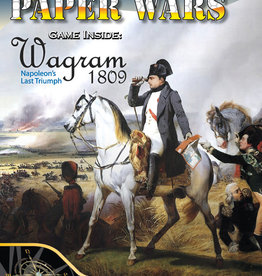 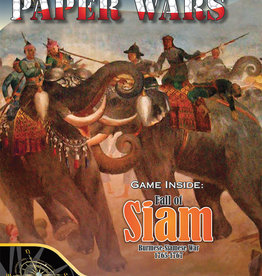 First and foremost, Paper Wars is a wargame review magazine.
Add to cart
Paper Wars #94: Fall of Siam (Magazine & Game)
$46.95
Please accept cookies to help us improve this website Is this OK? Yes No More on cookies »