The founder of Atlas/ Timely/ Marvel, Martin Goodman set up Atlas Comics (a division of his Seaboard Periodicals) to produce comic books as a direct rival to Marvel. Some speculate it was revenge for his son being removed as Marvel EIC. However the line folded in mid-1975 despite drawing in some of the best artists and writers in the business at the time including: Neal Adams, Howard Chaykin, Alex Toth, Steve Ditko, Rich Buckler, John Severin, Michael Fleisher, Russ Heath, Wally Wood, Walter Simonson, Larry Lieber and Mike Sekowsky. They where drawn to the new company by generous rates, return of original art, and a host of other creators rights (long before Image). 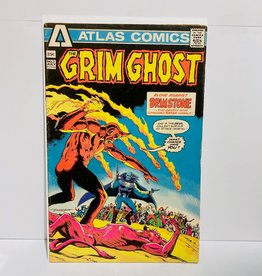 The Grim Ghost to battle the demon Brimstone. The FINAL issue of the series.
Grade: VF
Add to cart
Grim Ghost #3 (1975)
$15.00
Please accept cookies to help us improve this website Is this OK? Yes No More on cookies »